PumpkinPatchesAndMore.org - Find a pumpkin patch, corn maze, safe trick-or-treating, hayrides and other Fall and Halloween fun near you!

The observance of Halloween, which dates back to Celtic rituals thousands of years ago (see this page for the history of Halloween), has long been associated with images of witches, ghosts, devils and hobgoblins. In the United States, the first official citywide Halloween celebration occurred in Anoka, Minn., in 1921. Over the years, Halloween customs and rituals have changed dramatically. Today, many of the young and young at heart take a more light-spirited approach. They don scary disguises or ones that may bring on smiles when they go door to door for treats, or attend or host a Halloween party. And the tradition has spread to other countries: Japan and France have ever-growing Halloween parties and activities. It looks like about 171 million people in the US will celebrate Hallooween in 2016, considering more than 157 million Americans celebrated Halloween in 2015.

In 2015, 70% of those surveyed by the National Retail Federation handed out candy, 47% carved a pumpkin, 65% to 70% of 18 to 40 year old adults wore a costume, 36% visited a haunted house, 52% threw or attended a party and 20% dress up their pets.(ref) All of these percentages are up substantially from previous years. The 2016 spending should an average $82.93, up from 2015's $74.34  on decorations, candy, costumes and more. And the numbers really add up: according to the NRF survey, Americans are expected to spend $2.6 billion just on Halloween costumes for adults, children and pets. Total spending in 2016 - including candy and decorations - is expected to reach $8.4 billion according to the history of NRF's annual survey. Constrast that with 2010 when consumers spent $66.28 per person—which for a total of approximately $5.8 billion—on Halloween costumes, cards, and candy. And that was up from $56.31 in 2009. To see this data in graphs, click here!

Below are some interesting numbers and statistics regarding Halloween in the United States.  You may also want to see this page for similar information about pumpkin production in the U.S.

The trend in spending by US consumers on Halloween follows the economy in general, but overall is always upwards. Here's the NRF's graph (I think 2016 will end up being UP even more- come back next year to see if I'm right):. 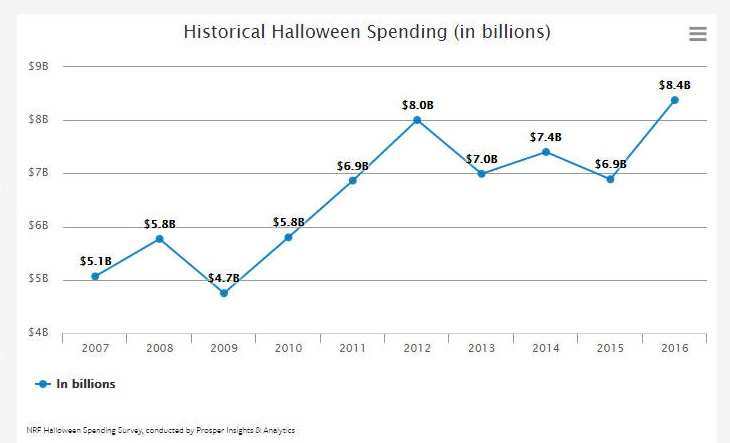 Number of occupied housing units across the nation in 2006 — all potential stops for trick-or-treaters.

- Percentage of households who consider their neighborhood safe. In addition, 78 percent said they were not afraid to walk alone at night. (Source: Extended Measures of Well-Being: Living Conditions in the United States, 2003, at

Where to Spend Halloween?

Some places around the country that may put you in the Halloween mood are:

In 2016, the top selling costomes for children are action/superhero, princess, animal, Batman character and a Star Wars character.

The top five costumes for adults are a Batman character, a witch, and animal, a superhero, and a vampire.
Also popular are, for boys,  Zombies, Minions, Star Wars and for girls Disney's Frozen characters, especially Princess Elena.

Top costumes last year, according to the National Retail Federation:

2015's top costumes were very similar. see the chart below:

- Number of U.S. establishments that manufactured non-chocolate confectionary products in 2005. These establishments employed 21,389 people and shipped $7.6 billion worth of goods that year. California also led the nation in this category, with 73 establishments.   (2005 Value of Product Shipments) - Per capita consumption of candy by Americans in 2006; it is believed a large portion is consumed around Halloween. - Number of costume rental and formal wear establishments across the nation in 2005.

Other fun and useful Halloween information